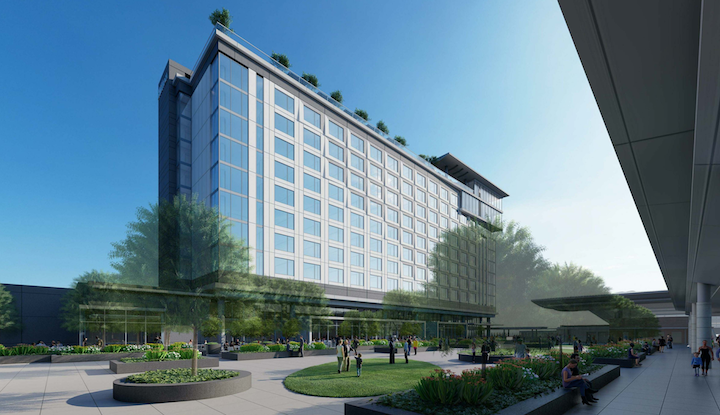 Nashville International Airport is poised to gain something it’s never had — a hotel on its property.

The board of the Metro Nashville Airport Authority unanimously voted Wednesday to hire Franklin-based developer Chartwell Hospitality to build a 292-room Hilton (NYSE: HLT) hotel. The $177 million construction project involves the nine-story Hilton BNA International hotel sitting atop a five-level parking garage for airport passengers, hotel guests and the public. Both are set to open in the second half of 2023.

The forthcoming hotel fills in another piece of the airport’s ongoing $1.4 billion BNA Vision expansion, which also is creating a wing for international arrivals and another concourse for its biggest carrier, Southwest Airlines. The airport had experienced breakneck growth leading up to the pandemic, in tandem with Nashville’s rise on the national and international stage. The hotel project signals that airport leaders — and Chartwell — are betting on Nashville’s recovery and continued growth in the long term.

“With this airport hotel, we’re selling Nashville to the rest of the world. That’s really the essence of this project and what has us so excited about it,” said Scott Kendall, vice president of acquisitions and development at Chartwell.

“We want this to be one of the top on-airport hotels in the United States,” Kendall said in an interview. “The delivery time on the project is perfect for when the hospitality market and local economy and flight enplanements are supposed to have recovered. We feel very optimistic and confident. It’s even more of an achievement here during Covid, for sure.”

The hotel will include a rooftop bar and pool, as well as a restaurant and 16,500 square feet of meeting and event space. A covered pedestrian bridge will connect the hotel and parking garage to the airport’s new central terminal.

Chartwell is one of Nashville’s biggest and longest-tenured hotel developers with almost 2,000 rooms in the region and three hotels under construction. Chartwell will invest $95 million to develop the hotel, on land it will lease from the airport on an initial 75-year term. The airport will finance construction of the $82 million parking garage.

Parking garage construction begins one year from now. Hotel construction is set to begin in July 2022, Kendall said, and wrap up right before the Christmas holidays in 2023.

Chartwell will pay the airport an initial $500,000 a year to lease the land, and also share a percentage of the hotel’s future earnings. Chartwell has committed to a goal of 8.3% of the hotel work going toward companies that fall under the definition of the federal Airport Concession Disadvantaged Business Enterprise program.

“It’s easy to see the appeal for passengers catching an early morning flight, arriving late at night or who simply want the convenience of a hotel room right here at the airport,” said Doug Kreulen, president and CEO of the airport. “We think it will be a popular venue for corporate functions and business meetings with unique airport views and sightlines.”