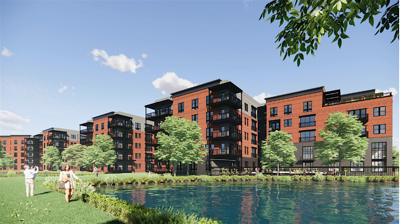 On-site work is underway and an image has been released related to a two-building, multifamily development at the MetroCenter site formerly home to film and art school Watkins College.

EJF Capital LLC of Arlington, Virginia, and Nashville-based Chartwell Residential are jointly undertaking the project, to be called The Chartwell at Watkins and to carry a roughly $80 million price tag.

The start follow the two entities’ having recently paid $22.5 million for the 13.6-acre property in June 2021. Belmont University was the seller. The site includes Amulet Lake.

As the Post previously reported, the two buildings will comprise approximately 750 units collectively and be constructed in two phases. The now-underway The Chartwell at Watkins will include approximately 377 residences in a five-story apartment building with an above-grade 518-space parking garage. It is slated for completion in early 2024 and will sit at 550 Great Circle Road. Ground will break on the second multifamily building soon thereafter, with that structure to contain approximately 375 units and offer an address of 2298 Rosa Parks Blvd.

Chartwell (via Chartwell Residential and Franklin-based sister operation Chartwell Hospitality) has developed multiple sites with commercial, residential and hotel buildings with a collective value of about $2 billion (and approximately $700 million worth of development currently underway).

In the greater Nashville market, Chartwell has 21 apartment developments completed or underway and 12 hotels owned and operating or under management, and three hotels under construction. With 1,200 employees, the company bills itself as the second largest hotel owner and operator headquartered in the region.